I come from a long line of Montanans dating back to the homestead days. In the late 1800s my great-great-grandfather, a cook on a cattle drive, decided to call Billings, Montana, home. As a young angler alongside my grandfather and uncle, I was spoiled by Montana’s premier trout waters such as the Bighorn, Yellowstone, Stillwater, and Boulder rivers. Even though I have been fishing for as long as I can remember, I didn’t pick up a fly rod until the age of 13. But once I did, the addiction began. Learning how to row a drift boat on “The Horn” at age 16 started me down an unknown path that would soon lead to a loved career in the guiding world.

In 1996 I moved to Bozeman to attend Montana State University. During college, while delivering lumber, a local outfitter asked me to consider being a guide. After I declined the offer several times, my curiosity got the better of me and in 1999 I took a few anglers out to see if I would enjoy the experience. This ended up being a calling to a career that I never considered, and I have enjoyed the ride ever since. Twenty years later I am still guiding anglers, but I am starting to hand down my knowledge to younger, up and coming guides.

In my career, I have had the opportunity to work with anglers age 8 to 90, beginners to experts, those with disabilities or terminal diseases, families, and large groups. I know how important it is to take time to teach people the skills they need to get the most out of their fly fishing experience, making memories that last a lifetime for the client and for me.

I am single parent with two wonderful daughters Emily and Elizabeth. We reside in Bozeman, Montana. Because we live in Bozeman, I personally make the daily commute to our waters. Trout On The Fly has guides located in Ennis, West Yellowstone, Bozeman, Livingston, Helena, Cascade, Three Forks and Cameron, Montana. 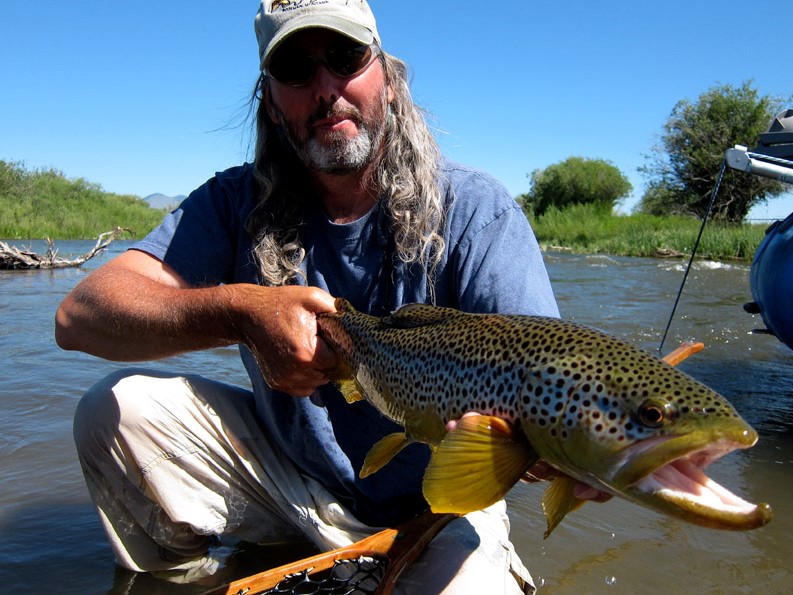 Nathan grew up in Minnesota, the Land of Ten Thousand Lakes and a whole lot of rivers. He found his passion for rivers while living on the upper Mississippi fishing for walleye, smallies, and muskies. Like many Minnesotans, he started fishing with cane poles and worms. Since then, he has fished for just about everything in freshwater, with every kind of gear, graduating up to Spey rods for steelhead (and trout) in Oregon, Idaho, Washington, and British Columbia.

In 1985 he moved to Bozeman, where he pursued a microbiology degree but has, in actuality, spent his time “wasting his life” as an unrepentant fly fishing river rat.

There are few rivers worth fishing in Montana that he hasn’t spent time on in the last 35 years.

Nathan truly enjoys teaching fly fishing to the uninitiated and passing on whatever techniques and expertise he can to those who have experience. While nymphing is the most productive method, he loves to fish dries, and is a hardcore streamer junkie, and will gladly pursue those methods if his clients prefer. He also has extensive experience on less productive rivers and stretches of rivers that frequently fish well for those who might want to venture off the beaten path.

Nathan lives in Bozeman, MT and is certified in CPR and first aid. 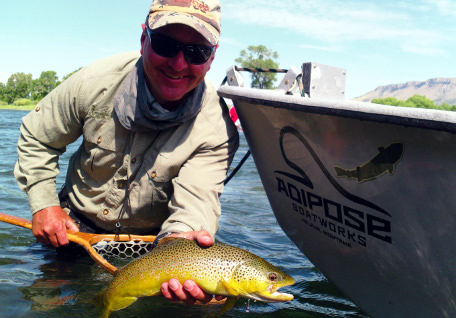 Originally for Wyoming, Rick moved to the “Big Sky” state for the world-class fly fishing, skiing, and hunting. Rick is no stranger when it comes to guiding anglers and hunters as he has been guiding both before anyone knew what guiding was about. Rick is an independent contractor like most guides in Montana, but he is not like most guides. His knowledge of fly fishing and hunting on Montana’s waters and land surpass the “average” guide. Rick has the patience and will spend the time teaching you the basics from how to hold a rod, casting, line management, knots to releasing a trout properly. Rick goes above and beyond for all his clients and it is not uncommon to find Rick out with clients until dark just to cast a dry fly to rising fish in an evening hatch. Rick has a work ethic that the West was built on and you can be sure he will work hard for you on any day you fish with him! Rick is proficient on the Madison, Gallatin, and Yellowstone Rivers. Rick was voted best guide in “Best of Big Sky” 2019. Rick lives between Big Sky, Montana, and Bozeman, Montana on highway 191.

Rick lives on the Gallatin River between Bozeman, MT and Big Sky, MT. He is certified in CPR and first aid. 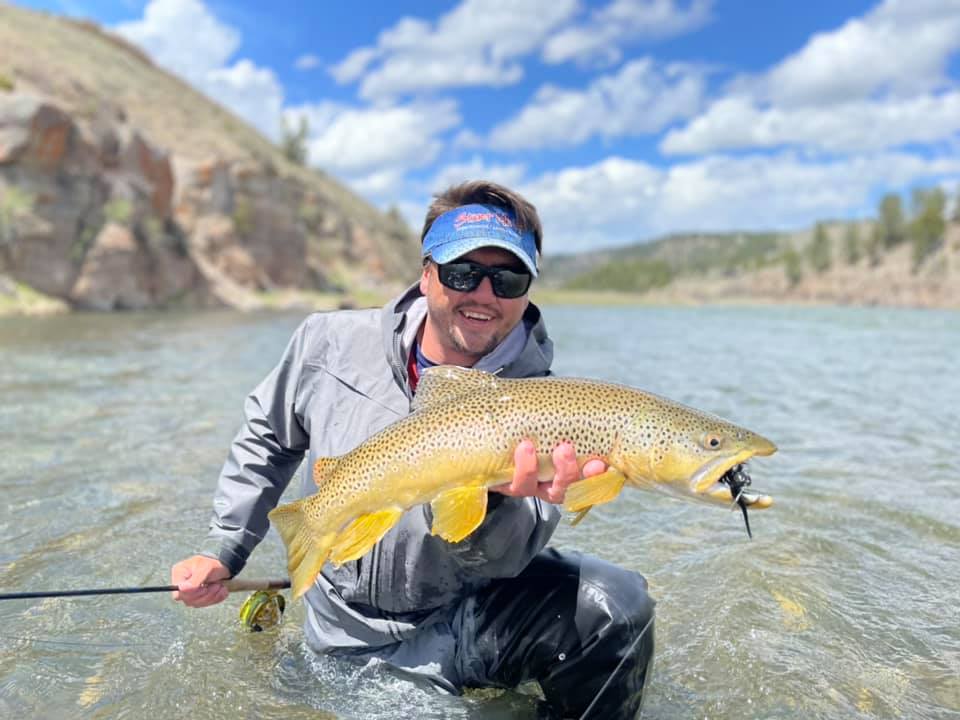 Matt’s affinity for fly fishing started at an early age. While growing up in his home state of Colorado, he travelled the backroads and spent countless hours scouring the rivers in pursuit of wild brook, rainbow, and brown trout.  His insatiable appetite for fishing inevitably turned into a career and he started guiding trips and teaching anglers of all skill levels. Because his passion for the sport only continued to flourish, he decided to capitalize on every opportunity to fish and moved to Maui to further his angling career. After chasing pelagic fish for 5 years off the shores of Maui and becoming USCG licensed captain, Matt decided to leave the ocean and return to the rivers to do what he loves most, which is fly fish.

Matt is an honest, hardworking, and passionate angler. His outgoing personality, excellent instruction, and natural communication skills makes him an expert at building positive client relationships. If you’re wanting a memorable fly fishing experience that includes laughter and education, spend a day on the river with Matt.

Matt lives in Bozeman, Montana and is certified in First Aid and CPR. 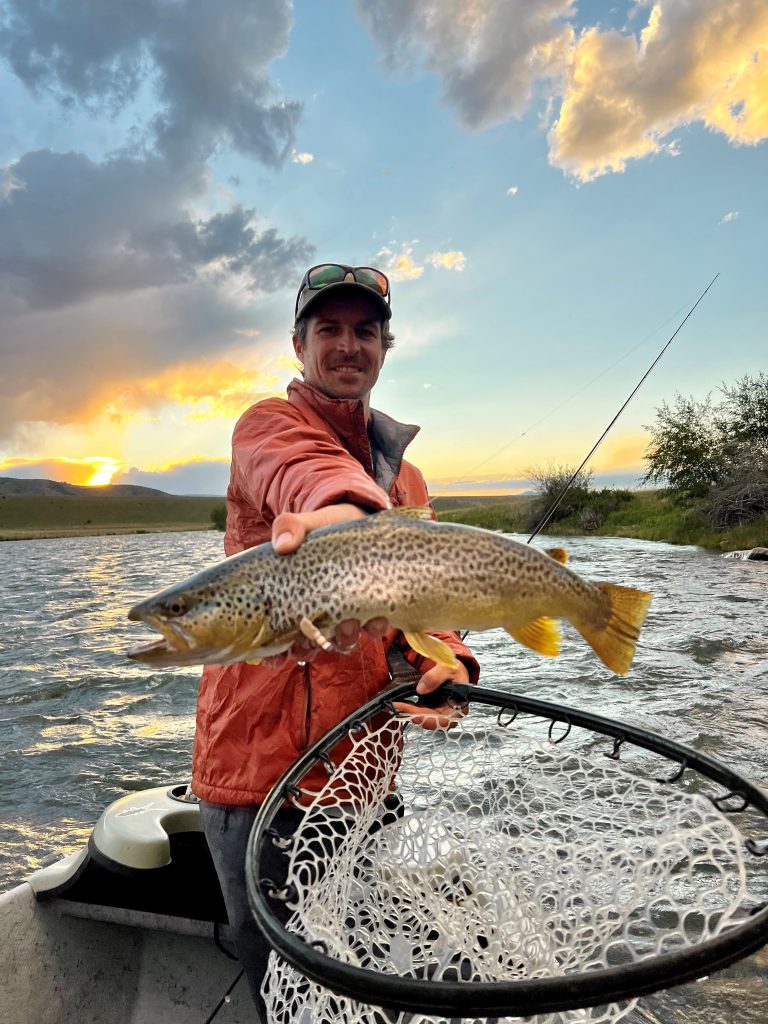 Sam grew up in the mountains of Vermont, fishing the docks of Lake Champlain since he could walk. Throughout his childhood, Sam was a focused competitive snowboarder and spent summers wakeboarding and chasing northern pike on the lake. A passion for cooking took hold in high school, and work was all he could do. All while sneaking away in the mornings to target native brook trout in small mountain streams.

His passion and love of snow brought him to Bozeman in the fall of 2009. He fished rivers for a few months with conventional tackle, and then after fly fishing the Ruby River one day with a friend from Three Forks, MT; he put down the spinners and spoons to chase trout on the fly.

In the summer of 2011, Sam took a job as a chef at a fly fishing lodge in Alaska, and his obsession only grew from there. Spending 2 years targeting all five species of pacific salmon and rainbow trout is where he learned how to approach any situation with a fly rod. 8 years and three restaurants later, he left the kitchen to follow his dreams and spend every day he could on the water.

Sam loves to teach newcomers and finds more joy in others catching fish than himself these days. He likes to simplify fishing for people in a way to allow them to learn rather than be overwhelmed. Sam loves to fish big dry flies and streamers but knows the importance of the all-mighty strike indicator when it comes to catching fish. You can still find him chasing deep powder on his board when he’s not on the water or just hanging with his dogs tying flies.

Sam lives in Bozeman, MT. He is certified in CPR and first aid. 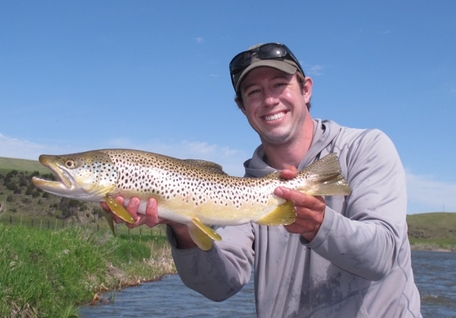 Garrett Blackburn learned to catch trout at a young age on the waters near Saratoga, Wyoming and Arkansas’s White River. An Oklahoma native, he learned to target bass, panfish and anything else that would eat a fly. In 2003 he moved to Montana to attend college at the University of Montana and began his guiding career in the Bristol Bay region of Alaska at Bristol Bay Lodge. After graduating, he began guiding year round on the rivers of Southwest Montana in the summers and Chilean Patagonia during the winters. For 7 winters he guided anglers in Chile at Martin Pescador Lodge. Today Garrett spends most of his time on the water guiding anglers on the Madison river but loves to explore fisheries all over Montana. Garrett is a USCG licensed captain which allows him to guide under power. He is versatile on Montana and Yellowstone National Park waters for the jet boat, drift boat, and walk wade trips. Garrett lives in Ennis, Montana.

Garrett lives in Ennis, MT. He is certified in CPR and first aid. 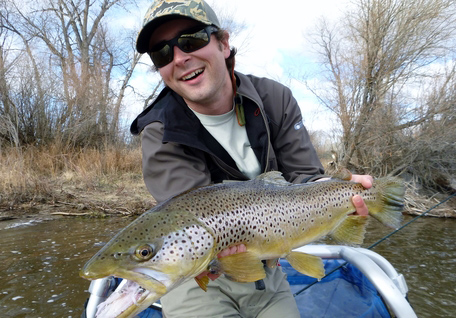 John developed his fishing skills early on the inshore waterways of Massachusetts, hunting the striped bass and blues of Cape Cod and the North Shore. After graduating from school hungry for bigger mountains and rivers, he moved to Bozeman and has been chasing big trout ever since. John is an avid fly tier, spending many hours during the cold months at the vice spinning feathers. He loves to test late night creations on big browns when the rivers are chilly and quiet. John has spent a few seasons as a ski patroller, and he is a certified EMT. John enjoys teaching others the fun and excitement fly fishing has to offer, as well as everything he has come to love about Montana. John is adept on the Madison, Yellowstone, Gallatin, Jefferson, and Missouri Rivers. John lives in Belgrade, Montana with his wife and daughter.

John lives in Belgrade, MT. He is certified in CPR and first aid. 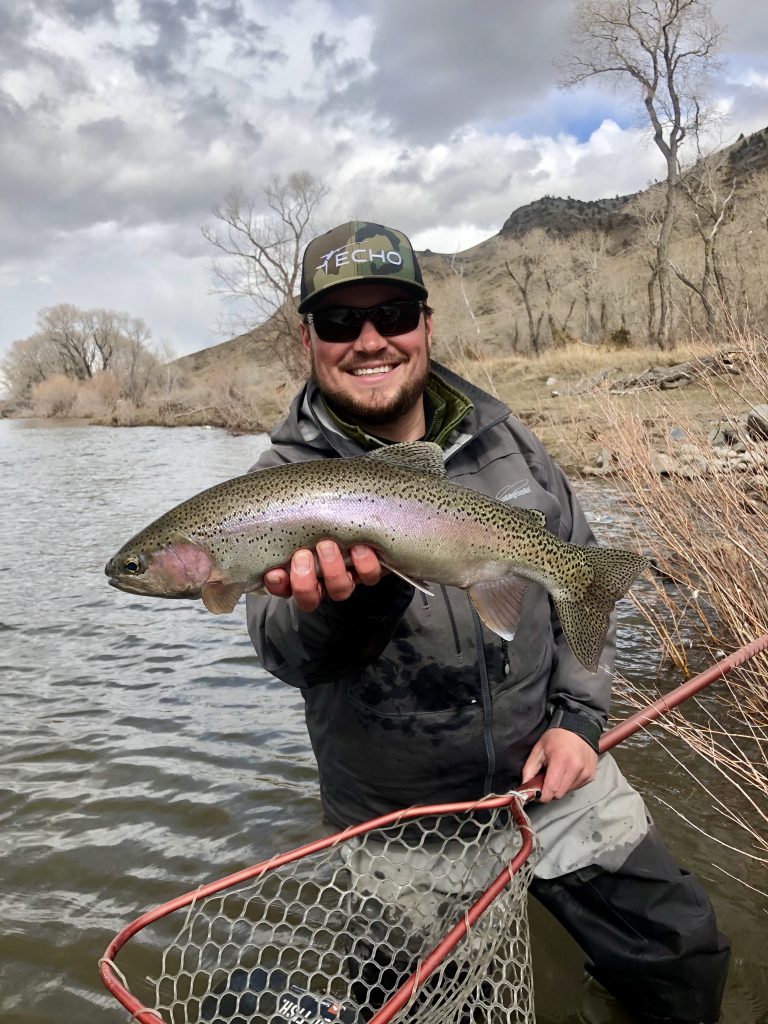 Originally from Minnesota, Ryan has been living and fishing in the Bozeman area for the last 15 years. His passion for the outdoors comes second to none, and his desire for adventure is always present. Ryan is a big fish junkie and can often be found on the Yellowstone throwing streamers with any free time he may have. Ryan is proficient on the Yellowstone and Madison Rivers. His background in the industry ranges from guiding around SW Montana to being an Orvis fishing manager.  After a long guide season, Ryan can be found in the high county chasing elk with his bow or out on the plains of eastern MT in pursuit of Pronghorn Antelope, as hunting is another one of Ryan’s greatest passions. As an independent contractor for the past six years, Ryan has been a great addition to Trout On The Fly team.

Ryan lives in Bozeman, MT. He is certified in first aid and CPR. 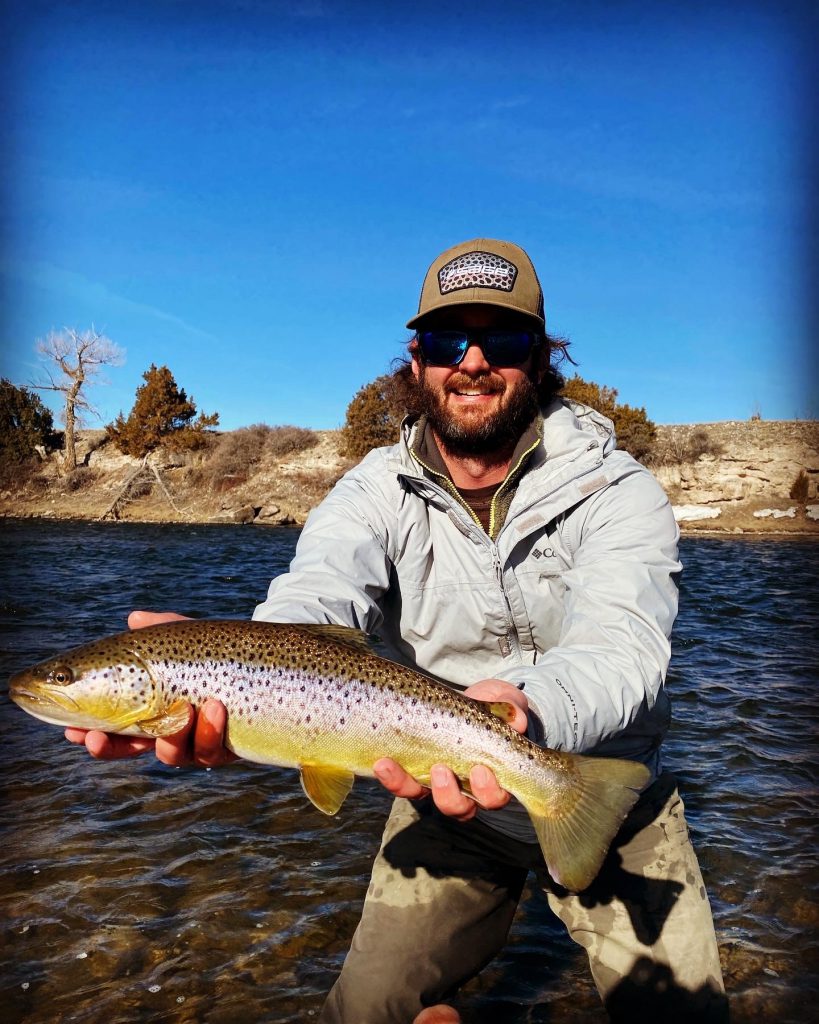 Sam is from the south, and when you hear him speak, there is no mistaking it. With that accent, he brings a laid-back southern approach to fly fishing. Spending time in Alabama, Georgia, and South Carolina in his youth, Sam grew up fishing for largemouth bass, redfish, flounder, and speckled trout. In 2019, Sam decided to change it up and moved to Montana to fly fish for the beautiful mountain trout. He took to fly fishing like a fish to water! Sam loves being a guide and has a passion for sharing knowledge and experiences with those who fish with him.

You’re guaranteed to walk away with a great experience when you fish with Sam. With his calm, positive, and relaxed instruction, Sam is dedicated to making you a better angler and getting the most out of your trip. Priding himself on good manners and being courteous, you will have a great time out on the river with Sam.

Sam lives in Belgrade, MT. He is certified in first aid and CPR.